Hessian fly infestations appear to be a widespread issue for wheat producers in parts of Central Texas and the Blacklands region this year, according to Texas A&M AgriLife Extension Service experts.

David Drake, AgriLife Extension integrated pest management specialist, Commerce, said he has received numerous calls to look at infested wheat fields. Infestations around the state have been site-specific, but above-normal temperatures and dry fall weather likely allowed pest numbers to build. Some fields were likely to be salvaged for forage, while others were expected to be plowed under and replanted with other crops.

The Hessian fly is a small fly that can severely damage wheat and other small grain crops like barley and rye during its larval stage. There are several wild host-plant species for the Hessian fly including quack grass, western wheatgrass, goat grass, timothy and other wild grasses.

The cigar-shaped larvae have a creamy white body with a green streak down the middle of its back. After feeding for some time, the larva forms a puparium, which ranges in color from dark brown to black and resembles a flaxseed.

“Some infestations are more severe than I have ever seen,” Drake said. “We typically don’t see infestations that bad, but once fields are infested there’s really not much you can do.”

Drake said crop rotation in fields and nearby fields is necessary to mitigate Hessian fly infestations. Cropping wheat to wheat in the same fields should be avoided. Timing of wheat planting is also a contributor to infestation potential.

“We tell most wheat grain producers to put off planting until flies are no longer a problem, but a lot of wheat is planted early as a dual-purpose crop for winter grazing and summer grain,” he said. “That can be a problem with back-to-back wheat. That is why rotation is important.”

Drake said there are Hessian fly tolerant wheat varieties, including TAM 204, which is a dual-purpose wheat, that can reduce tiller damages. AgriLife Extension specialists recommend producers look for Hessian flies in wheat fields and evaluate infestations, subsequent damage and the wheat variety’s ability to withstand feeding and yield loss.

Producers should consider the stage of progress, soil moisture conditions, yield potential and whether they can plow the field under and plant warm-season crops. Those with crop insurance should discuss options with their agent.

“It’s been a tough year for wheat producers in some areas. A lot of wheat acres were droughted out,” he said. “Having a Hessian fly infestation in a field that might be perking up adds insult to injury.” 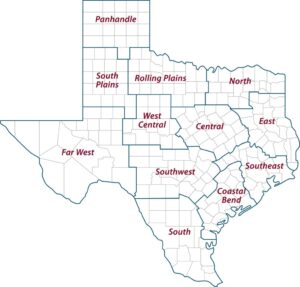 Soil moisture levels were mostly very short. Windy conditions and above-normal temperatures with nearly zero precipitation were stressing the heading stage of winter wheat and corn. Pasture grasses were developing slowly under dry conditions. The heat, wind and dry conditions were holding disease off flag-leaf wheat, but some leaf rust and leaf stripe were seen in fields, mostly on the lower leaves. Cotton planting was being held up a bit until some precipitation improves topsoil. Cattle looked good with grazing on winter oats and rye and hay bales. Overall, rangeland and pasture conditions were poor. Stock tanks were in good shape.

Some rain was received, and plants were starting to green up. Rain amounts ranged from 0.7-3 inches. Several areas reported continued drought conditions, but drier areas remained on fire watch. Some counties were lifting burn bans. Wheat conditions improved, but fields need more rain. Some wheat fields were total losses. Rainfall runoff replenished stock tanks. High winds were drying out soils. Cattle were being supplemented with hay and feed. Fieldwork was limited to shredding cotton stalks and water conservation repairs. Farmers were getting ready to plant cotton but were waiting until conditions were less windy and dry to plant. Some sorghum growers were considering other crops, but some grain sorghum fields were planted before the rains.

Soil moisture conditions continued to be dry due to a lack of rain and high winds. Most corn and grain sorghum fields were planted. Cotton was still being planted, and some fields had emerged where planted in moisture. Rice was coming up. Most field crops were beginning to show stress, especially in lighter soils. Pasture conditions were dry, and the available forage was poor quality. Livestock were still being fed hay and protein supplements as needed. Cattle were in fair to good condition, but were losing condition daily from lack of forage, especially the spring calves. Many producers were pulling fall calves earlier than normal due to declining conditions. Livestock were still bringing high market prices.

Recent rainfall helped relieve drought conditions to some extent. Much more rain was needed, and some rain chances were forecasted. Rain and warmer temperatures promoted growth in grasses, and ponds and creeks looked better after catching some runoff. Harrison County reported strong winds dried moisture up quickly and increased the danger of wildfires. Pasture and rangeland conditions were fair to good. Subsoil and topsoil conditions were adequate. Livestock were doing fair to good with supplementation taking place. Rising fertilizer prices remained a concern for producers. Wild pig activity and damage increased.

Extreme drought conditions continued across the district. Some irrigated winter wheat was growing with the warmer temperatures. Farmers were starting to spray weeds for spring planting. Producers who locked in fertilizer prices last year started fertilizing. Many farmers were still considering planting decisions based on drought conditions. Cattle continued to be supplementally fed. Many producers were thinning herds due to dry conditions and upward price trends. Several grass fires were reported.

Dry conditions persisted, and soil moisture levels were very short to short. There has been no measurable rainfall in the past several months, and conditions were taking their toll on the land and producers. Producers with irrigation were running pivots on winter wheat to get silage or grazing for stocker cattle. With grain prices up considerably for wheat, producers were considering whether to take it to harvest. Rangeland green up started but was very slow due to dry conditions. Overall rangeland and pasture conditions were very poor to poor. Ranchers were beginning to thin herds as feed supplies were running low. Wildfires were a real danger.

Soil moisture was adequate to surplus. A recent rainstorm boosted growth in pastures and wheat and oat fields. Rainfall amounts reached almost 2 inches in parts of the district, but more rainfall was needed. High winds stole some of the moisture away. Wheat was mostly fair to good. However, more wheat fields were heavily infested by Hessian flies, and yields will be reduced. Oats were in good condition. Sorghum was planted. Pasture and rangeland conditions were very poor to excellent.

Conditions remained dry, but some scattered rainfall delivered up to a half inch in a few areas. Daytime temperatures were in the mid-70s with a few colder nights with lows in the low-40s. Rangeland conditions continued to deteriorate in drier areas. Only irrigated wheat remained. A few producers who were pre-watering fields have already shut off wells because pivots were not adding soil moisture. Producers were having a very difficult time getting corn to emerge on irrigated ground, and many were considering abandoning the crop. Cotton producers were preparing fields, and some planting was underway. Some wheat and oats under irrigation were expected to be cut and baled. Ranchers were considering culling herds soon without rain. Growers began planting watermelons and directing irrigation to the crop due to high price potential. Producers completed lambing and kidding. Cattle continued to be sold due to the price of feed and reduced availability. Pastures were bare, with no weeds or grass present. Mesquite was late greening up. Producers were worried about potential herd consolidation due to drought. Alfalfa fields and pecan orchards continued to receive irrigation.

It was another hot, dry and windy week. Small showers last week resulted in some green up, but very little. Fields were being prepared for cotton planting, but dryland fields will need rainfall. Dryland wheat fields failed, and irrigated wheat yields will be below average. Corn fields emerged. Pastures have no grazing, and livestock were being fed.

Pastures were greening up and in good condition but getting dry. Soil moisture levels were very short to adequate. Rains were in the forecast. Rice was being planted. Some areas were drier after missing recent rains. Crops were in good condition, but cooler mornings slowed crop establishment. Some rice farmers were irrigating to get the crop started. Trees were progressing, but still slow to complete the budding process. Vegetable gardens were requiring irrigation most days, along with wind protection. Good stands of winter forages were reported. Rangeland and pasture ratings were very poor to fair.

Weather conditions continued to be dry throughout the district. Rangeland and non-irrigated pastures continued to decline. Fire danger remained extremely high, and 1,500 acres were reported burned. Hay fields were being irrigated. Most oat fields were being grazed. Lambing and kidding continued, and some shearing began. Supplemental feeding of livestock continued. Livestock were in fair to good condition. Livestock prices rose slightly, and producers continued to cull herds. Deer looked thin.

Morning temperatures were cooler, but Hidalgo County reported a daytime high of 104 degrees. Winds up to 60 mph were reported during a storm. Spotty rainfall fell with trace amounts reported. Northern parts of the district reported very short moisture level, while southern areas reported very short to adequate moisture. Eastern and western areas reported short soil moisture. Irrigation pivots were running on wheat and row crops, including corn and sorghum. More row-crop acres were planted, and some corn, sorghum and cotton growers wrapped up planting. Some planted sorghum fields were already abandoned. Emergence in some planted sorghum and cotton fields was spotty. Early planted cotton was showing its first leaves. Citrus trees were being irrigated, and some damaged trees continued to be cleared. Onion and vegetable harvests continued. Some winter vegetable fields were being plowed under and prepared for warm-season crops. Irrigation canals were being prepared, and some Bermuda grass fields were being watered. Those fields were green and nearing their first cutting. Rangeland and pasture conditions were poor in most areas, while a few areas were reporting fair to good rangeland conditions. Wildfire potential was high. Some producers were dealing with small brush fires, but Duval County reported around 11,000 acres burned. Stock tanks were low. Producers were hauling hay, and some were hauling water. Hay supplies were declining, with bales around $60-$80 each. Cattle markets fluctuated some with lower prices for feeder cattle. Cattle producers were culling cows and calves deeper. Wildlife foraging increased along roadsides.

By Adam Russell with AgriLife Today

Texans could carry handguns without a permit...